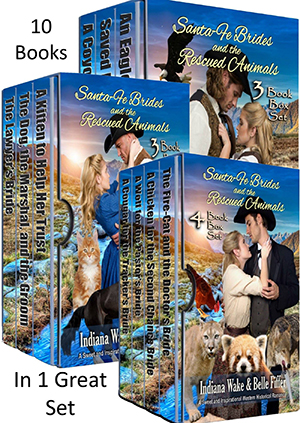 Can an old Indian and animals in need of rescue heal hearts and secure futures? Find out in this Special 10 Book Set of sweet and inspirational historical romances. 10 amazing romances and 10 wonderful animals needing homes and hearts to love.

A Kitten to Help her Trust Again.
Emma’s heart was broken by a man she trusted, one she always believed she would marry.

The Dog, the Marshal, and the Groom.
Losing her husband was heartbreaking for Paula, when a man starts to pressure her into marriage she heads west for a new life.

The Lawyers Wife
Simone lost both her parents and became homeless. She has always been told what she can do and she is looking for freedom as well as a husband.

An Eagle for the Soldier’s Bride
Alexandra’s father traded her hand in marriage to pay off his debts. Disgusted with Jonathan, the man she is to marry she runs to Santa-Fe to start a new life.

Saved By Love
Hermione finds a rabbit shot and injured and cannot bring herself to take it for the pot. John Blackwolf helps her nurse it back to health.

A Coyote for the Rancher’s Bride
Beth lost her husband shortly after their daughter turned four. The only offer of help was marriage to a man who didn’t want her daughter. Beth runs to Santa Fe for a new life.

The Fire Cat and the Doctor’s Bride.
A handsome doctor and an exotic pet that she loves from the minute she meets him, what more could Dianna want from a husband.

A Chicken for the Second Chance Bride.
Elizabeth lost her husband just before she found out she was pregnant. Living with an overbearing mother-in-law eventually became too much and she fled to the west. Can an injured chicken bring her new love and a chance for a happy future?

A Wolf for the Pastor’s Bride.
Olivia is looking for her family. As an orphan, she has always wondered where she came from and has traced her mother to Santa Fe. Pastor John Coyne has been helping her and she finds herself getting close to the handsome man with his rescued wolf for a pet. Will she discover the family she hopes or will her heart be dashed once more?

A Cougar for the Tracker’s Bride.
Kara has been spending a lot of time at the animal center since John Blackwolf’s son an Apache tracker arrived with his rescued cougar.

Men can be rough, tough, and unruly in the old west but these men have already opened their hearts to one kind of love, can they find true love with the bride of their dreams? Find out in this sweet, historical box set of ten amazing romances by two bestselling authors.

Other Books in "Santa-Fe Brides and the Rescued Animals" 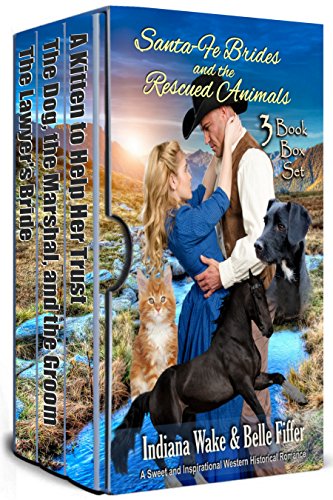 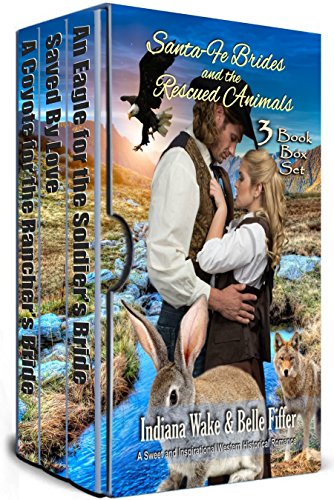 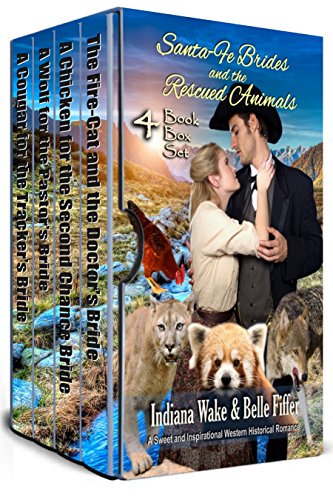 Santa-Fe Brides and the Rescued Animals Vol 3 Books 7-10
Look Inside
Disclosure of Material Connection: Some of the links in the page above are "affiliate links." This means if you click on the link and purchase the item, I will receive an affiliate commission. I am disclosing this in accordance with the Federal Trade Commission's 16 CFR, Part 255: "Guides Concerning the Use of Endorsements and Testimonials in Advertising."
← Sacrifice for Love
The Orphan and the Horse Whisperer →