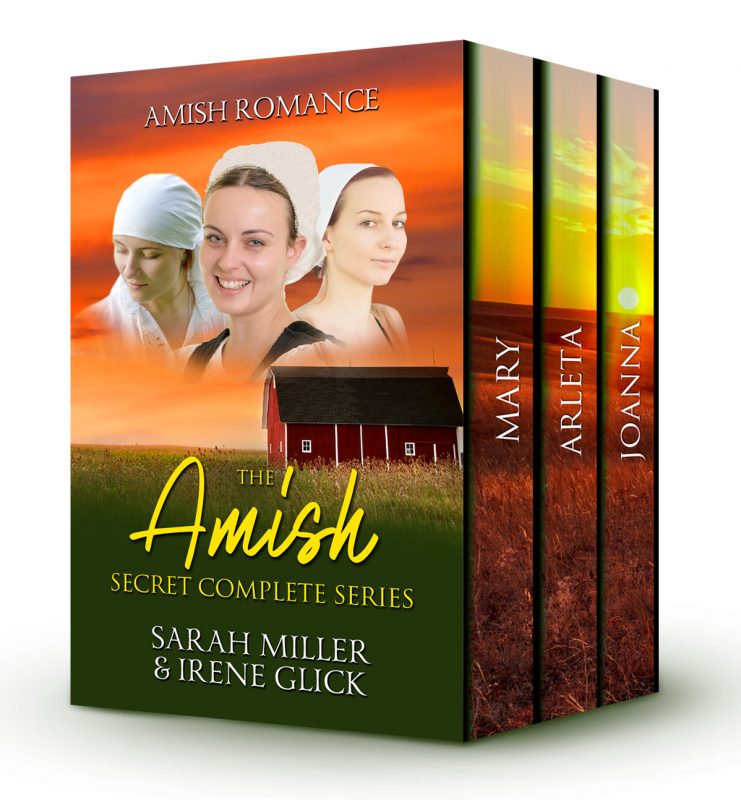 The Amish Secret - grab the complete series bundled together in one volume just for you.
FREE with Kindle Unlimited.

Included:
A run of bad luck, a family secret, and a newcomer to Faith’s Creek. Is this the start of something good or will the past come back to haunt the Harrison family?

Mary: Mary Harrison struggles to hold her family together. As the eldest sister of three girls, Mary believes it’s her job to help her father and tend to their mother. She doesn’t understand why more people aren’t offering to help.
Ivan Camp recently arrived in Faith’s Creek and is delighted to help the Harrison family. He’s not afraid of hard work and feels a kinship with the family from the start.

Mary takes a shine to Ivan but she doesn’t know much about him and he doesn’t seem eager to share his past. She’s concerned about the bits of gossip some of the townswomen are whispering about her father. What secrets are held within her family?

Just as things get back on track, disaster strikes. Will the family be able to pull things together in time for the harvest?
Will Mary put her faith in Gott to provide for her family and her heart?
Can she put away her self-doubt and admit her feelings to Ivan or will his past come back to haunt him before she has the chance?

Arleta: Arleta Harrison has a kind heart and loves working in the fields, with her brother-in-law Ivan. It’s there that she notices a stranger lurking, the mystery man resembles Ivan. Could they be related?

Victor Camp wants nothing more than to make amends with his brother Ivan but he is scared it’ll be impossible. Ivan suffered when Victor ran away. How will he ever forgive him?

Victor likes the town of Faith’s Creek and especially the beautiful woman who wants to help him reconnect with his brother. He must turn to Gott for strength if he hopes to find peace and happiness.

Before he’s prepared, Victor comes face-to-face with his brother when an emergency arises. Can he help or will disaster strike and he be forced to leave Faith’s Creek and the woman he’s falling in love with behind?

Joanna: Joanna Harrison has watched her older sisters find love and now she thinks she’s found her own. Unfortunately, the man who’s caught her eye is the same man that caused strife in her family.

Englischer lawyer Paul Cooper had no intention of dividing a family when he came to Faith’s Creek to do his job. He sees the havoc he wrought and is devastated. The last thing he wanted was to hurt the family of the woman he’s falling in love with.

Can Joanna and Paul put their faith in Gott to overcome their differences and the secrets he unleashed on her family?
Is it possible for Paul to ever be accepted by her family?

Can the Harrison family forgive each other for the secrets and harsh words that have been shared?

Look Inside
Disclosure of Material Connection: Some of the links in the page above are "affiliate links." This means if you click on the link and purchase the item, I will receive an affiliate commission. I am disclosing this in accordance with the Federal Trade Commission's 16 CFR, Part 255: "Guides Concerning the Use of Endorsements and Testimonials in Advertising."
← Love, Heart, and Family 30 Book Box Set
A New Amish Love →