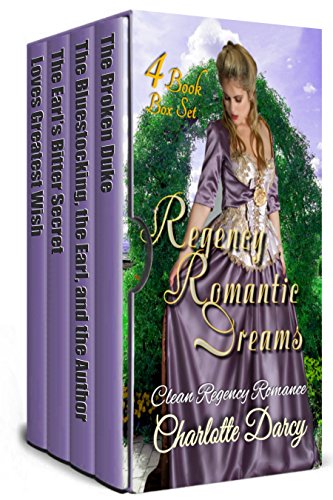 The 4 book box set contains 3 of my favorite novels and a brand new book that will delight and intrigue.

The Broken Duke Mended by Love

“Well, I do not feel like marrying.” Duke Harcourt Beckleham could not think of any woman who could tempt him to marry — yet he knew that he must. For the sake of the duchy and for the sake of his sisters, he must bring much needed income into the estate. This is made very clear when an unfortunate incident leaves him indisposed in front of some local merchants. Can he keep secret the state of his finances?

As the nightmares of his past life come back to haunt him he escapes to his town house for one last week little knowing that it will change his life forever.

A meeting with a local seamstress, a plot to destroy the duchy, and a lady placed in danger are all part of this light, clean, and fun historical romance.

The Bluestocking, the Earl, and the Author

Georgian Beckleham is not like most young ladies, many would call her a Bluestocking, so why is the Earl of Tarlbridge constantly drawn to her?

Georgian has known Tristan since they were children, she just wonders why he has never grown up. Though he often makes her want to laugh, she refuses to give him the satisfaction. What fool spends his days leaping out from behind hedges and scaring horses?

Jeremy Tudor is the author of a satirical book on manners. Georgian finds his work most delightful.

Tristan has never admitted his feelings for Georgian but now that a rival is on the scene he must make a decision and see if he can follow it through.

However he needs to decide, will he accept her as she is or would he seek to change this wonderful woman?

The Earl’s Bitter Secret
Can a forthright Governess save an Earl from a frightful secret that could destroy his life and that of his children?

Mary Porter does not need to work. Now that her father had inherited a fortune she could stay at home until she is married. Yet she misses her little Dame school, misses the children and so she agrees to take a post as governess to the children of the cold and austere Earl of Pennington.

His children seem so sad to her but it is not long before Mary’s tongue gets her into trouble. Has she lost the job and her chance to improve on the children’s lives?

Mary hears rumors about his wife and why she is not there, but she knows it is not her place to interfere. That is until she inadvertently reads the Duke’s secret. It is one he has only recently discovered and it threatens to destroy his life and that of his children.

Has he found an ally in Mary? Will she track down the truth and if she does will it save him or bring his Earldom crashing down around his feet?

Loves Greatest Secret
Find out how the family fortune was born out of both hope and despair and how love can find us even at our lowest.

John Howell lost his wife and wondered if he would lose his mind. Overwhelmed with sadness he travels to New York to begin a new life. Expecting to work and nothing more he is surprised when love starts to bloom within him when he meets a young woman called Lara.
However, he cannot get over the terrible loss of his wife.
Lara knows he is keeping things from her and he will not open up. She decides that she must let him go.
Can John battle his demons and allow love a second chance?

Find out the answer to all these questions in this delightful Regency romance box set. It will have you laughing, crying, and loving the warm and remarkable happy ever after’s

All books are sweet and inspirational and suitable for all ages.

Look Inside
Disclosure of Material Connection: Some of the links in the page above are "affiliate links." This means if you click on the link and purchase the item, I will receive an affiliate commission. I am disclosing this in accordance with the Federal Trade Commission's 16 CFR, Part 255: "Guides Concerning the Use of Endorsements and Testimonials in Advertising."
← The Lady and the Secret Duke
31 Sweet Brides, Mega Box Set of Inspirational Romance Stories →