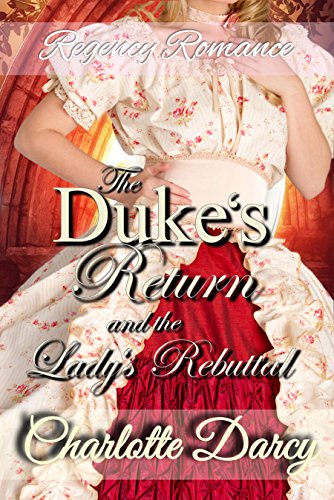 Juliet will lose her home on the death of her father. The Duke of Millington will lose everything unless he marries. Both will only marry for Love.

Benedict Astor, the Duke of Millington has returned from 6 years of war only to find his father dead and his title and land soon to be given to another. He has but a few months to find a wife if he wishes to keep his home and his title. Only Benedict would only marry for love. Can he now give up on his principles and marry for duty?

Juliet Morgan is nursing her dying father knowing that on his death she will lose her home. The property is entailed to her cousin and he is a man she does not know. When her solicitor suggests that she marry the Duke of Millington she is insulted and reacts with anger. How dare this man presume that she is desperate?

Benedict is knocked form his horse one day by a daring woman taking a hedge too quickly, when he finds out it is Juliet he is suddenly interested. Not only did she have the courage to turn him down but she is beautiful, intelligent and of strong character. Everything he wants in a woman.

While his own sister plots and schemes for him to lose his inheritance all he can think of is Juliet but she will not accept even the smallest word from him.

In despair, Benedict decides he must marry a title hunter or lose all he has. Yet there is trouble for Juliet, her cousin has decided she will be his.

Can Benedict come to terms with giving up on his principle or will he walk away from his home? Will Juliet lose all, even her freedom? Find out in this sweet regency romance The Duke’s Return and the Lady’s Rebuttal FREE on KU.

Look Inside
Disclosure of Material Connection: Some of the links in the page above are "affiliate links." This means if you click on the link and purchase the item, I will receive an affiliate commission. I am disclosing this in accordance with the Federal Trade Commission's 16 CFR, Part 255: "Guides Concerning the Use of Endorsements and Testimonials in Advertising."
← Regency Romance: The Earl and Mrs. Dalloway
Love Against the Odds: 11 Book Regency Romance Box Set →