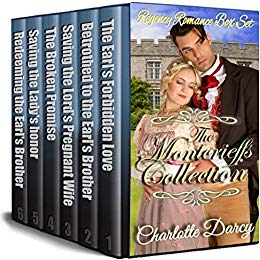 Adam Montcrieff is the Earl of Castleton, he has 5 dashing brothers and a mother who will not stay in the dowager house.
Following feedback from readers all of these books have been rewritten to be sweet, clean, and wholesome.

The first 5 books in this series were all bestsellers and now the final brother Gerard – the bad brother – has his own book. It can be found exclusively in this box set as the final book.

Redeeming the Earl’s Brother. Gerard fled to France after bringing shame on his family. For a long time, he was angry at what had been done to him! Now he returns, no longer a spoiled and arrogant child but a thoughtful man. Will society accept him? Will he be strong enough to show his face? Soon he discovers all is not right in Castleton. When a friend is taken to jail will Gerard step up? When two young women wish to set up a ragged school, will Gerard help them achieve their goals? Find out if the Earl’s brother is redeemed in this touching romance of second chances.

Also included:
The Earl’s Forbidden Love – Adam Montcrieff must marry for money, to save the duchy, yet he loves his childhood friend a commoner. Will he follow his heart or live the lonely life like his father?

Betrothed to the Earl’s Brother – Miss Emily Bowers is a quiet little mouse. Daughter to Lord and Lady Bowers. Now she is to be married to Gerald Montcrieff. An arrogant young man who would ruin her for his pleasure and cheat on her once they were married. He delights in humiliating her and playing her off against her best friend. In the shadows, Benjamin Montcrieff has been watching Emily and has grown to love her quick wit and rare humor. Can he save her from his brother? Will she even look at him and will he be left to live in a house where his one true love is married to a beast?

Saving the Lord’s Pregnant Wife – Jerome Montcrieff hates to hunt and yet here he is at another boring meeting following along at the back. Lord Brent-Savitt is a bore and his dastardly behavior has everyone squirming in their saddle but the way he treats his wife has Jerome’s blood boiling. Jerome finds himself falling for Lady Brent-Savitt, what is he doing?
Fate puts a great temptation in Jerome’s way. Will he sacrifice all for his love or will he be the better man?

The Broken Promise – Having been dumped for an Earl by his childhood sweetheart Minerva, Hugh Montcrieff leaves his Castleton Estate for some time in the City.

Saving the Lady’s Honor – A broken heart and a love rejected, can a Montcrieff once fooled — save his lady’s honor?

Look Inside
Disclosure of Material Connection: Some of the links in the page above are "affiliate links." This means if you click on the link and purchase the item, I will receive an affiliate commission. I am disclosing this in accordance with the Federal Trade Commission's 16 CFR, Part 255: "Guides Concerning the Use of Endorsements and Testimonials in Advertising."
← Regency Romance: The Bluestocking, The Earl, and the Author
Refusing the Duke →