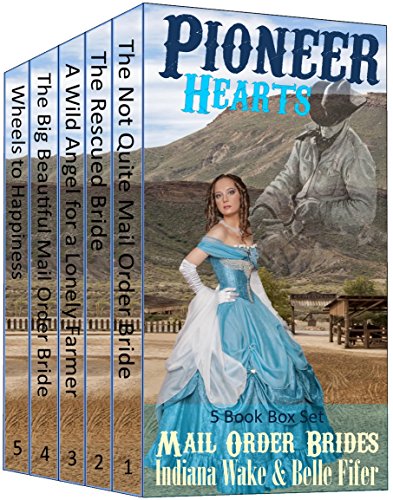 In the 1800’s Mail Order Brides were brave and powerful, strong and romantic heading to a brave new world full of hope, possibility and maybe love. Their lives were fraught with danger, daring and new adventures. Follow 5 Mail Order Brides as they head west looking for a new start and most of all love.

The Not Quite Mail Order Bride – It is 1893 and a desperate Ma sends off her daughter as a Mail Order Bride. As she is sneaking away, Mr. Tarlton stops her. Will he report her? No, he confesses his loves and asks her to stay. But Loretta is a good Christian girl, and a promise has been made, money changed hands. She will make the perilous journey and see what becomes of her. Two hard men from the mines are hot on her trail, and she will face hunger, danger and gunfire before her journey ends.

The Rescued Bride. The year is 1894 and one brave woman heads west to beat the shadows.
Miriam has worked a farm with her brother for as many years as she has fought off the men from the mine. But now the shadows are closing in, and a long kept secret haunts her dreams. Could the letter she holds be the answer to her prayers?
Despite the resistance of her brother, she heads West as a Mail Order Bride and steps down from the train into a wall of heat. She has never seen as much dust or so many cattle. These are not gentle beasts like the ones back home but are mean and restless like the men who drive them. And then evil appears out of the dust. Has he followed her? Is there no safety even here?

A Wild Angel for a Lonely Farmer 1896 A Wild Angel Must Race For Her Future
It is two years after the Bonner family escaped to the West. All Tessy can think about is owning a piece of land and starting a horse ranch. But she needs a man to sign the paperwork, and she needs to win the horse race to start her dream.
Zachariah Owen misses his sister Miriam after she moved to Kansas as a Mail Order Bride. When he receives the letter from Tessy asking if he will marry her so that she can get the land he thinks it is preposterous.
So why is he heading West and what will he find?
A wild woman atop a streak of light stallion almost runs into his team. Only later does he discover this is Tessy. What will he do when he stops her entering the race? Will he marry her and head back home or will he find this wild angel just what he was looking for?

The Big Beautiful Mail order Bride The Year is 1891, and a Big Beautiful Woman is about to become a Mail Order Bride.
Maggie was always happy and ready to help; that was until the terrible fire that took her parents and her home. What is she to do? The unhappy circumstances challenge her faith and one day she answers the advert of the gentleman of means who is looking for a Mail Order Bride.
Has she found her true happiness?
She journeys west without mentioning that she is a Big Beautiful Woman but when she gets there things are not as they seem. Has she swapped one life of servitude for another or is something else afoot?

Wheels to Happiness The Beautiful Mail Order Bride and the Heroic Cripple
It is 1892 in Redemption Montana.
Simon sits in his wheelchair and stares at the woman he loves. The Mail Order Bride who was to be for him. The woman he gave up because she loved someone else.
Many miles away in Chester, rich and beautiful Charlotte misses her friend. Traveling West across the miles she wonders what it would be like to choose your own husband. Could she ever do that?
On Meeting Simon, she is intrigued. The man is kind and generous and heroic. She can see that he is in love with Maggie, but she makes it her mission to find him a bride. Will she be able to mend his broken heart and give him back his will to live?

Look Inside
Disclosure of Material Connection: Some of the links in the page above are "affiliate links." This means if you click on the link and purchase the item, I will receive an affiliate commission. I am disclosing this in accordance with the Federal Trade Commission's 16 CFR, Part 255: "Guides Concerning the Use of Endorsements and Testimonials in Advertising."
← Esther
The Stolen Bride Saves the Rancher →