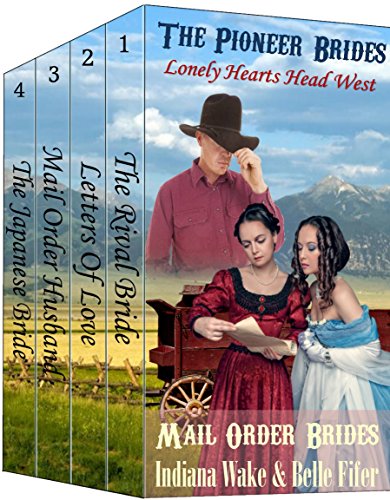 The Rival Bride – Can Betrayal and Sacrifice Lead to Love?
Kristine is the eldest of three sisters, and she would do anything to keep them safe, but could she do this?
Their mother died many years ago which turned their father to drink and gambling. Now their fortune is gone and soon her sisters must leave their finishing school. What will happen to them? Where will they live? What will they eat? Will they be thrown onto the streets?
When her father tells her what he has done, she feels her heart break. It is preposterous to think that he would sell her to a man just to pay off his gambling debts. But what choice does she have? Keeping her pride she makes a deal with him and sets off to the Wild West to become nothing more than a maid and a wife in name only.

Letters of Love – sent across the miles, should a young girl follow her heart?

Courtney hates finishing school and all through her lessons all she can see is Clifton Graham’s mischievous eyes. Should she leave school and go find the man she loves? But what does he say in his letters? Thought the language is poetic, is he offering her marriage?
After a terrible incident Courtney sets off with her sister Patricia to find out if Clifton will marry her. But after Clifton snubs her what is she to do? She must face a storm, an angry brother-in-law and an ultimatum at gunpoint.

Mail Order Husband – The year is 1888 and a strong woman waits with baited breath.
Abby watched her best friend, and only love interest marry a Mail Order Bride. What is she to do?
For five years she has lived as a widow. She has kept her ranch going and become stronger than she can imagine. But danger lurks around every corner and her cattle are going missing. Could it be the drought, or is there something more sinister afoot?
Will the man who steps off the train be the answer to all her dreams or will her nightmare continue?

The Japanese Bride – A Lonely Heart Sails West
Rena is lonely and prospects are poor in her Japanese village. When her grandmother tells her she sees great things for Rena it further ostracizes her from her sisters. She is drawn to an advert from an American gentleman, but will she find love or simply more heartache in another land. Frightened and all alone Rena sets sale to a strange new land?

Look Inside
Disclosure of Material Connection: Some of the links in the page above are "affiliate links." This means if you click on the link and purchase the item, I will receive an affiliate commission. I am disclosing this in accordance with the Federal Trade Commission's 16 CFR, Part 255: "Guides Concerning the Use of Endorsements and Testimonials in Advertising."
← A Big Beautiful Bride for a Broken Hearted Rancher
Two Suitors for Widow Mary →