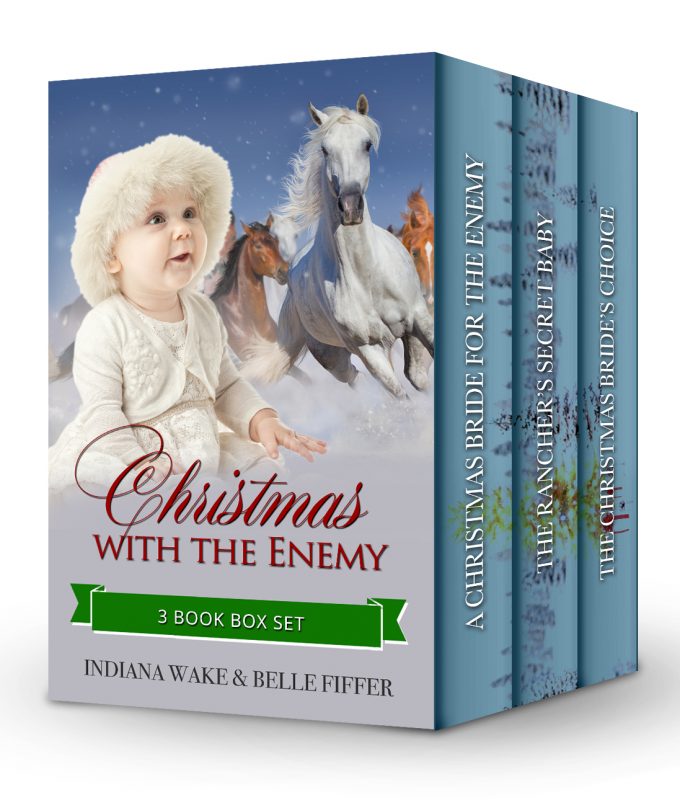 Special 3 Book Christmas Box Set - The Osborn sisters have suffered a terrible loss. The passing of their father left them alone and destitute. Samantha will do anything to take care of her sisters including working for her father’s enemy.

A Christmas Bride for the Enemy

Samantha Osborn has a foolproof plan to pay off her father’s debt and take care of her sisters. She’ll pretend to be a man and go to work for her father’s enemy, Paxton Mallory.

Troy Mallory, is Paxton’s oldest son, and he recognizes Samantha right away. He’s willing to keep her secret because he knows she desperately needs the money. The more Troy and Sam work together the closer they become.

What will happen when Troy shares his feelings about Samantha with his father? Will it destroy his relationship with Samantha and cost her the chance to keep a roof over her sister’s head this Christmas?

Burton Mallory gets the shock of his life when Eve Osborn walks in with a newborn and claims he’s the father. Burton has always been a player with no plans to settle down. He is shocked and doesn’t believe it. After discovering the mother’s dead Burton must face the truth; he is now a father.

Eve is happy to help Burton with baby Charlotte. She admires how he’s taken to fatherhood. But danger lurks for baby Charlotte, in the most unlikely of places.

Will Burton be able to protect his daughter and the woman he’s falling in love with?

The youngest Osborn sister is searching for her own happily ever after. Will she find love or heartbreak along the way?
Ruby Osborn has watched her sisters find husbands they love and she’s determined to find her own. In her desperation, she begins writing Otis Dodd, a man who helped put her father in debt.

Jared Mallory has been pining for Ruby and can’t stand the thought of her marrying that scoundrel, Otis. He’s determined to win Ruby’s heart.

As Otis and Jared vie for Ruby’s heart she must decide which man is honorable. Will Ruby make the right decision or be fooled by a charming man?

Look Inside
Disclosure of Material Connection: Some of the links in the page above are "affiliate links." This means if you click on the link and purchase the item, I will receive an affiliate commission. I am disclosing this in accordance with the Federal Trade Commission's 16 CFR, Part 255: "Guides Concerning the Use of Endorsements and Testimonials in Advertising."
← A Christmas Bride for the Hidden Hero
The Amish Dream →