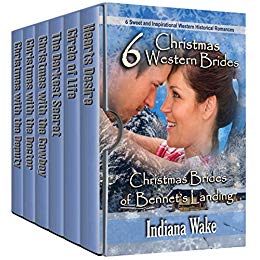 Hold onto your hat - 6 brand new books by bestselling authors Indiana & Belle – get ready for the love and romance, the heartbreak and the healing. These super Christmas Western Romances will keep you warm for the winter nights.
The Brides of Bennett’s Landing Box Set introduces Kitty and James Belfour and their strict and grumpy father Pastor Micah. As well as Penny, Fiona, and Kate Malleson. Running from their past to a future of hope and love.

Micah doesn’t trust the beautiful Kitty with any man, especially the newcomer Roscoe Palmer.
Is he right? Roscoe has a past he is running from. One that will catch up with him. Can Kitty and Roscoe find love or will it be snatched from them?

The Circle of Life

James has always been in awe of Melissa, Kitty’s wild and willful best friend. She grew up hard and she grew up strong but she is not the woman Micah would have for his son.
Another man comes to town, a ladies man and Melissa has fallen for his charms. Will James summon his own courage and take control of his future in time to save his love?

Micah is all alone and he knows he deserves it. A Dark Secret weighs heavy on his heart. Lisette George is a local widow. She starts to help in the Sunday school and the two gradually grow close but Micah knows he does not deserve happiness.
When Lisette finds out about his troubles will she run and leave or will she teach him that forgiveness is not just for his parishioners?

Christmas with the Cowboy

When her two nieces arrive Kate doesn’t know that they are running from arranged marriages will she help them?
Penny believed the man she was to be married to was a murderer. Now she is safe with her aunt but for how long? Can she find a man to marry to keep her safe?
An accidental meeting with cowboy Dominic begins a new relationship and love blossoms but an old flame returns and things get complicated. Will she sort it out in time to be safe for Christmas?

Christmas with the Doctor

Fiona finds herself working for the wonderful doctor Thomas Morris. Thomas is falling for her but is really worried for his pregnant. Will Fiona risk her safety to save his sister and can the two realize what they have in time for Christmas?

Christmas with the Deputy

There was only ever one man for Kate but she had to run away when she was just a child. Now she needs that man’s help to protect her nieces. Will he be prepared to give it and will a Christmas miracle see her finally able to resolve her issues and explain why she had to go.

Look Inside
Disclosure of Material Connection: Some of the links in the page above are "affiliate links." This means if you click on the link and purchase the item, I will receive an affiliate commission. I am disclosing this in accordance with the Federal Trade Commission's 16 CFR, Part 255: "Guides Concerning the Use of Endorsements and Testimonials in Advertising."
← No Choice for a Scarred Bride – Cora & Two Grooms for Grace
Charlotte’s Wedding →