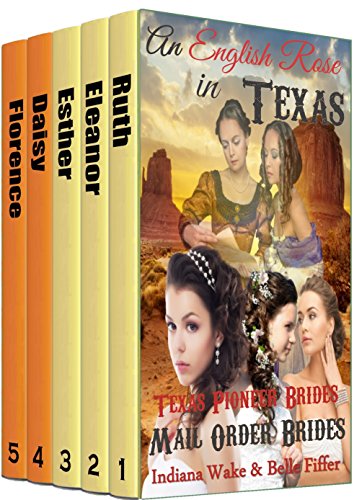 Five brave women head West looking for love, hope and security. What will they find?

Ruth: 1868 An English drawing room. “Is there nothing left?”
Three English ladies lose their father and then find out all the money is gone. What must they do? Is there no hope?
“Perhaps your father’s sister would be able to help,” the solicitor said before disappearing out of the room.
A sister, father had a sister?
A glimmer of hope surfaces. Soon Ruth and her two sisters set out on the long journey to Texas. What will they find? Will their Aunt take care of them, will she be able to find husbands for the younger girls? All this goes through Ruth’s mind as she makes the perilous journey across half the world.
Then she meets a handsome rancher and his darling daughter. Has she found love? Only his older daughter will have none of it. No one is taking the place of her Ma. Can Ruth find love and help this wounded soul?

Eleanor: Eleanor finds out she was betrothed just before her father’s death.

This time the flash in his eyes was stronger and didn’t fade completely. “My dear, surely it hasn’t been so long that you don’t recognize me. I am your betrothed, Mr. Wood.”

A betrothal and the promise of a fortune to keep her sisters safe, what is Eleanor to do? Even though the man is distasteful to her, she accepts his proposal and begins the long journey from Texas back to England. Can a handsome marshal overcome his reticence and save Eleanor from a fate she does not understand?

Ester A lonely Cowboy, an English rose, letters that may never be read.
Esther has watched her two sisters’ fall in love and marry the perfect men, but what of her? No one makes her heart flutter and her pulse race the way she wants it too.
So every morning, before the dawn, she rides alone. Riding fast across the plains is freedom and joy like nothing she has ever known. But when she comes back one morning to find the old ranch hand gone and the attractive Nate in his place things may have to change. The old hand kept her secret, but Nate… He seems to find her annoying will he tell her aunt and uncle?
Nate secretly writes letters to his love, letters that may never be sent, but when there is trouble Nate would give his life for Esther, but will it be enough?

Daisy: Daisy and her sister Florence have been sold to men because they are too fat to be married back home. Daisy is so shy and so frightened, and when she sees her betrothed she is horrified. No way will she marry this scruffy man.
Arlo lost his wife, but his daughter needs a Ma. Buying one seemed the easiest way, but now he has seen her he realizes that maybe he needs her too, only he is in such a state that no woman would ever look at him, especially not one as beautiful as Daisy.

Florence Florence is resigned to her fate. Too fat to be married back home she will marry this man and make the most of it, that is until she finds out that Clay Hardy is hated by everyone in two towns. Quickly putting the towns gossip in her place, Florence sets out to find the truth about her betrothed and truth is often stranger than fiction.

Look Inside
Disclosure of Material Connection: Some of the links in the page above are "affiliate links." This means if you click on the link and purchase the item, I will receive an affiliate commission. I am disclosing this in accordance with the Federal Trade Commission's 16 CFR, Part 255: "Guides Concerning the Use of Endorsements and Testimonials in Advertising."
← The Big Beautiful Bride Stolen by the Cattle Rustler
A Pregnant Bride and A Plump Bride Tricked by a Damaged Soldier →