Home > Books > 3 Regency Romances: The Duke, the Earl and the Joker 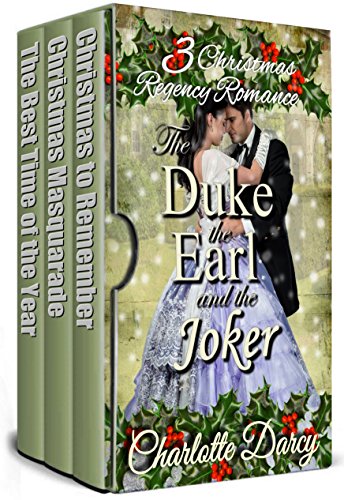 Enjoy these three complete but interlinked romances that will bring warmth to your heart and joy to the season.

A Christmas to Remember
Juliet Whitehall, is the eldest daughter of the Earl of Forbes. Being clumsy and tongue-tied she is in no rush to find a suitor.

Who would risk taking on such a jinxed wife?

Her clumsiness would only get worse when the Duke of Richfield comes to stay at their family home and of course he was coming for Christmas.

Edward Burton, had lost his father, and suddenly found himself with the title of the Duke of Richfield. After being invited to stay with the Earl and Countess of Forbes, for the Christmas period, he found himself being cast in the role of a Duke in a play.

He is hesitant in his role but then disaster strikes.

Can a Christmas Miracle bring two unlikely and yet perfect people together in this sweet Regency romance?

Kate Whitehall, lost her joy for Christmas, when her sister Juliet married and left home. Life seemed duller. Christmas, was going to be even worse, until a friend suggested they attend a few masquerade balls.

Dressed up, and behind a full mask, Kate was able to let go of her sadness just a little but could still not find the joy in the season. That was, until the man in the terrifying black mask engaged her in conversation… interesting conversation.

His deep voice, strong body, and obvious intelligence became something Kate wanted more of. Yet he disappeared, not returning when he said he would.

Left a little distraught she must wonder why he had shunned her?
Had she done something to offend him?

She cannot get him out of her mind and wants to know who was the man in the frightful mask …and would she get to meet him again?”

Find out in Christmas Masquerade.

The Best Time of Year

Stella Lawson had played an integral part in arranging the courtships, leading to the marriages of her best friends, the sisters Juliet and Kate Whitehall.

This year at Christmas, all was not going well. Their brother and a dear friend to her also, Adam Whitehall, was being pushed into courtships by his dear mama, with ladies he didn’t even know. Ladies he didn’t want to know.

Stella agrees to aid him in putting off his mother’s future consorts by persuading them that Adam is a buffoon.

Yet the more she helps, the more Adam seems like the perfect man, it’s a pity he’s only a friend… or is he?

Look Inside
Disclosure of Material Connection: Some of the links in the page above are "affiliate links." This means if you click on the link and purchase the item, I will receive an affiliate commission. I am disclosing this in accordance with the Federal Trade Commission's 16 CFR, Part 255: "Guides Concerning the Use of Endorsements and Testimonials in Advertising."
← Regency Romance: Christmas with the Frosty Lord
31 Inspirational Christmas Romances: Sweet Christmas Romance Box Set →