Home > Books > 2 Book Special Edition: Into the Unknown & The Call of the Hunter 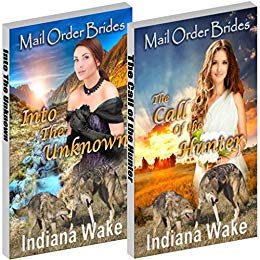 Two orphaned girls are sold into marriage... are their lives over or just beginning? – 2 Book Special set - based on a true story.

Book 1: Into the Unknown
Amy has decided to never give in again. Though she has been forced into this marriage, she will not go quietly into the unknown. Can she find hope, love, and kindness in her new home or is her husband as cold as the wolves who prowl his land?

Crawford is a rancher with a problem. Wolves are decimating his herd and causing him so many heartaches. They seem to always be one step ahead of him. Named as Bella and
Shadow the wolves avoid all traps set for them and their hunting is so bold it threatens the safety of the ranch. With problems like this, and the strain of his past, the last thing Crawford needs is a new wife… only his ma insisted.

Can these two troubled souls find love and a way to face the future?

Book 2: The Call of the Hunter

Melinda is all alone. Rejected by her prospective husband because of her damaged hand she is left on the street with no food or money. Found by a kindly soul her luck changes when he offers her a place to stay. It is small, and she has little, but it is more than she ever owned. Life would be perfect if only she knew if her friend was safe.

Bedford Harvey is a lone wolf, as cold as the creatures he hunts and just as wild. One night he sees Melinda running down the street. She has grace and speed, and the kind of lightness of being which suggested that she could be both the hunter and the hunted. Bedford cannot get her out of his mind only Melinda is not impressed with a man who would kill wolves.

Shadow is a wolf like no other. Fiercely loyal to his pack and his mate Bella, intelligent, cunning, and always one step ahead of his pursuers.

Look Inside
Disclosure of Material Connection: Some of the links in the page above are "affiliate links." This means if you click on the link and purchase the item, I will receive an affiliate commission. I am disclosing this in accordance with the Federal Trade Commission's 16 CFR, Part 255: "Guides Concerning the Use of Endorsements and Testimonials in Advertising."
← Keeping Her Safe
2 Book Special Edition: Trust, Doubt and a New Beginning & A Scruffy Cowboy to Heal Her Heart →